As part of the QRZ Summer Tour, we were recently treated to a visit of a unique floating maritime museum, the Icebreaker Mackinaw.  Aside from its being a fascinating exhibit in its own right, it has a very active amateur radio presence.  This ship is a must-visit, must-see for all hams. 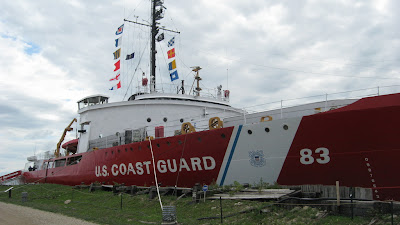 The Icebreaker Mackinaw is, as its name suggests, a US Coast Guard ice breaking ship that was built in, and assigned exclusively to the Great Lakes.  It served a distinguished, 62 year career that just ended in 2006.  As such, it contains a very interesting mix of technology spanning the entire period from dynamo motor-generators to a modern fiber optic data network.

If you've ever visited large ships like the aircraft carrier Midway or the battleship Missouri, you'll immediately notice the similarity between them and the Mackinaw.  Although only a fraction of the size of the large warships, the icebreaker nearly all the same amenities, just fewer of them.  Standing in one of her two large engine rooms, you feel dwarfed by massive, locomotive-sized engines and generators spanning multiple decks below the waterline.  Even though it is only a fraction of the size of most warship museums, it can still take hours to explore everything it has to offer. 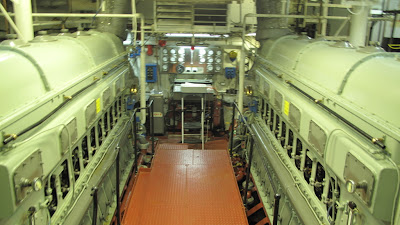 Soon after the ship was decommissioned and replaced with a newer model, it local hams volunteered and joined the museum staff.  On our visit, we met with Chuck, N8DNX, the president of the Charlevoix, Cheboygan, Emmet Counties Public Service Communications Organization - CCECPSCO  for short, who maintain the club station W8CCE

Thanks to their diligence, CCECPSCO has established a permanent amateur radio station aboard the ship using some of the ships original HF/SSB antennas and radio gear.  They have also installed a 2 repeaters on board, one UHF and one VHF, under the club station callsign W8AGB.

While visiting the ship, we met also met with volunteers Jim, AL7RV, and Chuck Brew, N8NXP who was also one of the ship's docents (tour guide).  Chuck gave us an excellent tour of the entire facility and answered all of our questions and more.

It bears noting that when the ship was decommissioned in 2006, it was turned over to the museum board in nearly the same condition that it last sailed under.  Although some of the specialized classified equipment has been removed or disabled, everything else on the ship remained in exactly the same way it was on the day it made its final berth.  The radio technician's room, for example, still contains test equipment, spare parts, soldering irons, tools, everything that she sailed with while operational.  The same holds true for the engine rooms where huge mechanics tool boxes are still full of all tools, spare parts, etc. that were necessary for daily operation.  As a museum,the ship is truly a specimen that was frozen in time.

The CCECPSCO staff are more than happy to have visiting hams sit down and operate the radio gear.  The equipment, some of which is military grade, is just sitting there, begging to be used.  If you plan on visiting the site, just walk right up to the radio deck and introduce yourself.  You'll be greeted by the other ham volunteers with welcome arms and you'll be able to operate the equipment for practically as long as you'd like.

CCECPSCO is also registered as a 501c, non-profit organization.  Donations are welcome and are tax deductible.  If you ever get a chance to visit Michigan, make sure Mackinaw City is on your itinerary and the Icebreaker Mackinaw on your must-do list.  If you're like us, you'll love it!

Our thanks go out to N8DNX, N8NXP, and AL7RV for their outstanding hospitality and for taking time out of their day to treat us to a personalized tour of the facility.

Click here to see 40+ additional photos from inside the Mackinaw.
Posted by Fred Lloyd, AA7BQ at 9:32 AM

Fred Lloyd, AA7BQ
Publisher and founder of the website http://www.qrz.com